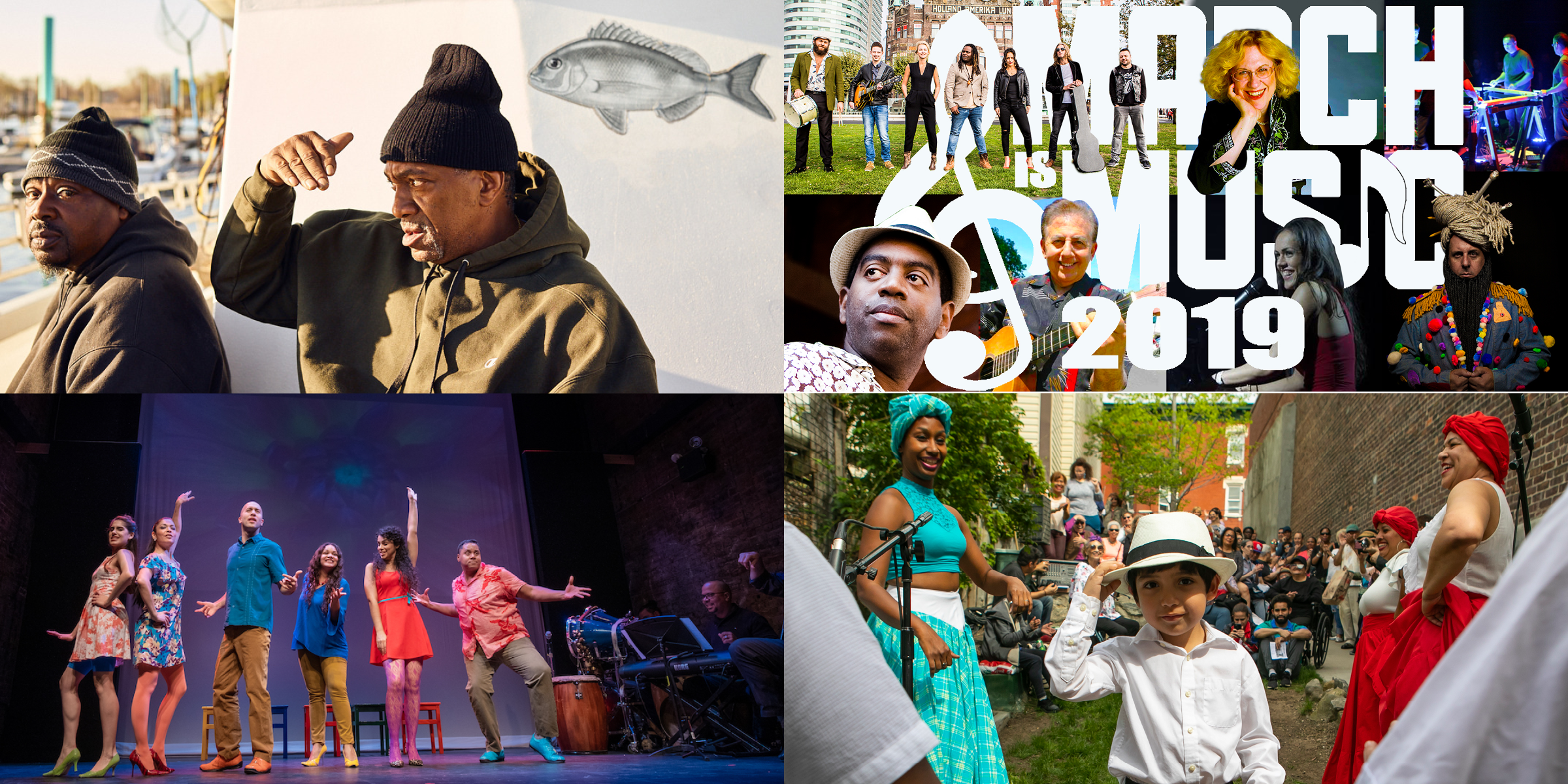 – The first thing to catch your eye in our Bronx theater lobby this month is a selection of oversize photographs of fishermen as they go about their daily business. It’s an unexpected view, briefly disorienting, and an effective reminder that in New York City we’re never far from the ocean. The images are from Ben Zucker’s photo-essay Fishermen of the Northeast Bronx, a tribute to the people of City Island and the maritime cultures of the great Pelham Bay. At the exhibition’s opening reception, packed with families from our northernmost neighborhoods, one of the men from the pictures announced, “It’s our first time downtown and we are the stars!”

That’s the Pregones/PRTT experience for you: welcome and surprise, home and hub.

The sold-out run of Made In Puerto Rico by Elizardi Castro, with an effusive shout-out from Sunny Hostin on ABC’s The View, proves it. The awesome list of world-class artists in our March Is Music series, including pianist and trans shero Sara Davis Buechner, an expert in the shared lineage of Caribbean danzas and American ragtime, who turned her Sunday afternoon concert into a fundraiser for our #MásPorPuertoRico drive, proves it. Recent performances of Evolution of A Sonero and El Apagón/The Blackout for Under The Radar at The Public Theater, Off-Center at Segerstrom Center for the Arts in California, and Teatro del Pueblo in Minnesota, prove it too! There’s universal value in our Puerto Rican/Latinx cultural heritage, and in programming for diverse communities from this very perspective. The sensibilities that keep us true to our mission, also make our activities vital, democratic, and future forward.

We thank every funder and donor who chooses this work, boosting our capacity to sustain and grow it over time. The following are among the most recent and noteworthy of your gifts:

Lincoln Center Cultural Innovation Fund, generously supported by The Rockefeller Foundation, honors Pregones/PRTT with a second round of support for Stage Garden Rumba. Now implemented in partnership with We Stay/Nos Quedamos CDC, the series animates outdoors spaces of the South Bronx with the work of artists, activists, and community members. Stage Garden Rumba has also been funded by Con Edison Community Partnerships, and we are working to extend its reach boroughwide and citywide.

Creative Capital announced its support of We Have Iré, a multidisciplinary theater work that explores the lives of Afro-Cuban and Cuban-American transnational artists living in the United States. Rosalba Rolón is one of three awarded project artists together with poet Paul Flores and composer Yosvany Terry. All three are Doris Duke Artist Awards winners, and We Have Iré is also a National Performance Network/Visual Arts Network (NPN/VAN) Creation & Development Fund Project co-commissioned by Pregones/PRTT in partnership with Yerba Buena Center for the Arts, GALA Hispanic Theater, MACLA, Miami Light Project, MECA Houston, and NPN/VAN. The Creation & Development Fund is supported by the Doris Duke Charitable Foundation, the Andrew W. Mellon Foundation, and the National Endowment for the Arts (a federal agency). For more information: www.npnweb.org.

The new JL Greene Arts Access Fund in The New York Community Trust has awarded support for the expansion of Pregones/PRTT’s existing incentives program for diverse communities to attend and participate in live arts. Free and subsidized admission to culturally relevant theater, music, dance, and film/media events in the Bronx and Manhattan are at the center of the project.

Pregones/PRTT and Touchstone Theater in Bethlehem, Pennsylvania, are joint recipients of a new grant from the Network of Ensemble Theaters’ Travel & Exchange Network (NET/TEN), supported by lead funding from The Andrew W. Mellon Foundation. Funded activities deepen a 30-year relationship between the South Bronx and Lehigh Valley through creative residency and intercultural community engagement.

All funded activities are now under way. The work will gradually segue into launch of a major anniversary celebration and new capital campaign, starting with the fall premiere of a new ensemble musical based on iconic Puerto Rican novel La guaracha del Macho Camacho by Luis Rafael Sánchez!

THANK YOU, GRACIAS, for being a big part of this. Whether first-time or returning partner, you are all stars too!